Character of Ekiti voters and leaders 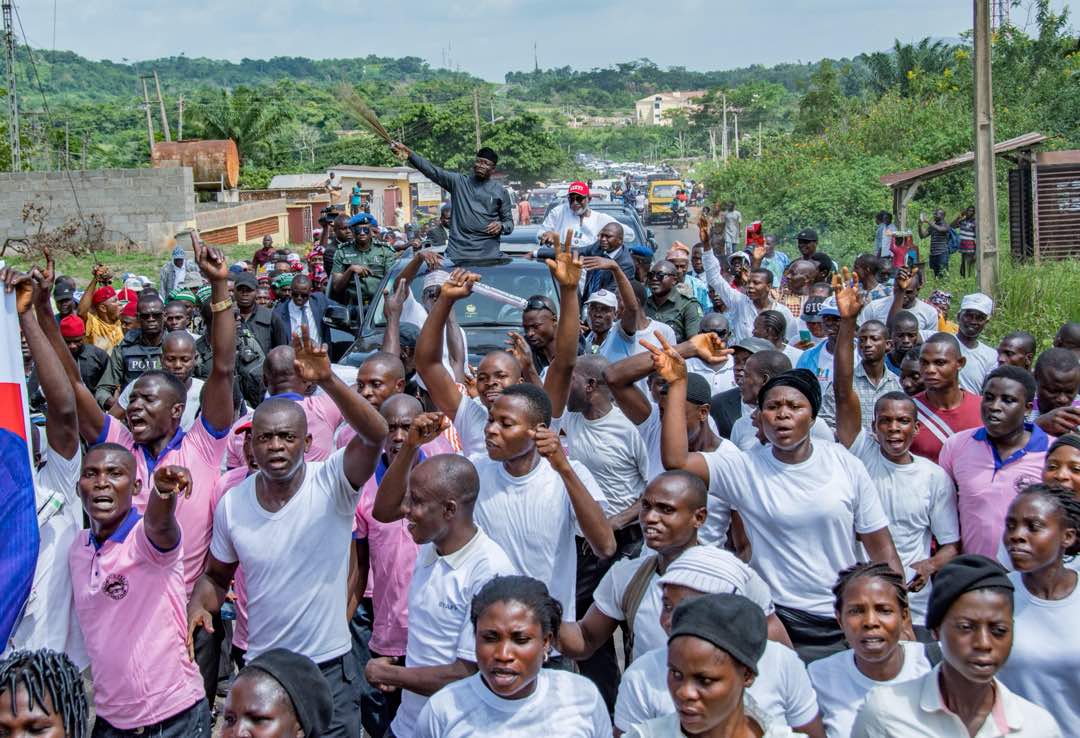 Chinua Achebe’s “Eneke the bird says that since men have learned to shoot without missing, he has learned to fly without perching (Things Fall Apart). It will appear Ekiti voters who decided to sell their votes during July 14 governorship elections have finally seen through the hollowness and hypocrisy of the same set of cynical leaders that have taken them for a ride these past 19 years. Voters behaviour during the election was evidence enough that those who opted to sell their votes did not see much difference between leaders who do not understand that democracy as a process is not just about self-righteousness but also requires some sense of humour, common touch and respect for the views of the governed, and those who fraudulently claim serving is a matter of life and death whether the people wanted them or not. If voters who sold their votes are prostitutes, how about the fair-weather leaders who do not seem to believe in anything?

We can trace the collapse of our political socialization process to Babangida and Abacha’s 13 years of fraudulent transition programme that produced our current ‘new breed’ politicians that bred nothing but greed. Obasanjo’s eight years of failed ‘mainstreaming’ through which he destroyed all budding political parties finally ended a political socialization process that started back in the 1923 with the inauguration of Herbert Macaulay’s ‘People Democratic Party’, the first political party in Nigeria.

Since the led look up to their leaders for direction, it can be argued that voters who behaved like prostitutes by opting to sell their votes to the highest bidders during the July 14 governorship election were only following the foot-steps of their political leaders.

Let us start with Ayo Fayose. He was rigged into power by Obasanjo’s PDP in 2003. Following his impeachment in 2006, he sought accommodation in the Labour Party under whose platform he contested for a senatorial seat which he lost to Babafemi Ojudu. He then briefly flirted with Action Congress party before ex-President Jonathan who was desperate to use Ekiti as a springboard for his 2015 doomed re-election bid, provided N4.7b, thousands of policemen, soldiers and other security personnel to rig sitting governor, Kayode Fayemi out of office in 2014. Today, besides a bridge over land, Fayose has little to show for his second coming. The return of an ill-equipped man who does not understand even the meaning of government seems to have been designed to prolong the nightmare of Ekiti people. While he owed workers about six months backlog of unpaid salary arrears, he was alleged to have wired miserable N4000 and N7000 respectively to civil servants and pensioners on the eve of the July 14 election.

We also have Engineer Segun Oni who was in the progressive camp until Obasanjo used him to settle scores with Fayose, his estranged godson. Obasanjo rigged him to office in 2007. While on the stolen throne, the sing song of his men was “we are in government, they are in court”. And for those three years, Oni pitched towns against one another over the siting of a nebulous University of Education. Oni moved from recklessness to folly creating disorder among his people. He later returned to his natural habitat-the progressive fold where he quickly rose to the position of deputy national chairman, southwest.

Ayo Arise was a successful businessman before joining politics. For him therefore, politics is business, Thus when he lost the AD governorship primary election in 2003 and again that of AC in 2007, he without hesitation crossed over to PDP controlled in the southwest by Obasanjo, Adedibu, Bode George and Tony Anenih. He went on to win a controversial senate seat under his new party which was nullified by an appeal court ion July 8, 2009 as a result of ‘flaws during the conduct of the election’. He later won in the re-run election.

Again, following irreconcilable differences between him and Fayose, he ran back to APC. While Governor-elect Fayemi has denied vote-buying in his own constituency where he voted, Arise, as a chieftain of APC was on Channels Television last week saying “My people told me PDP had paid them some money. What do you expect me to do?”

Opeyemi Bamidele, a brilliant and talented politician was a leading light of AC and APC in Ekiti before some disagreement with his friend and political ally, Fayemi drove him to the Labour Party. He contested against Fayemi and Fayose in 2014 declaring “God sees my heart, the only reason I am involved in Ekiti politics is to serve and help the people; I do not have any reason to be desperate”.

But from the pronouncements of his PDP backers from Abuja, it was obvious he was used as a spoiler to narrow the chances of Fayemi in 2014. In fact the first person Fayose thanked for making it possible for him to become a governor after his controversial victory over Fayemi was Bamidele. Today he is back as a chieftain of APC.

Prince Adeyeye is a progressive who once served as the national publicity secretary of the pan-Yoruba socio-political group, Afenifere, and also served as the national publicity secretary of the Alliance for Democracy (AD).He left the progressive fold in December 2006 when he contested in the defunct Action Congress (AC) governorship primary won by Fayemi alleging the exercise was marred by irregularities. He dumped his progressive credentials and joined the PDP and was made State Universal Basic Education Board (SUBEB) chairman by former Governor Segun Oni before he was later appointed Minister of State for Works by former President Goodluck Jonathan. He also served as PDP national caretaker committee publicity secretary.

However, following the loss of the governorship primary to Fayose’s preferred successor, Deputy Governor Kolapo Olusola, not too long ago, he went back to APC claiming opposition to Fayose’s “continuity of impunity, imposition, poverty and unprecedented looting of the people’s common patrimony.” He said he was ‘joining forces with other eminent Ekiti sons and daughters to free the state from the vulture and predator feeding fat on the state’s commonwealth.’

Another APC catch on the eve of the July 14 governorship election was Fatimat Raji Rasaki, representing Ekiti Central Senatorial District. She is the wife of a former military governor of Lagos. Ekiti voters surely know Rasaki is one of Abuja senators smiling to their banks every month with a mouth-watering N13.5m besides her salary.

It must be admitted Ekiti ‘new breed’ politicians are not different from their counterparts in nPDP or R-APC. Even Senate President Saraki who literally stole the senate presidency in 2015 now says moving back to PDP, a party he dumped in 2013, was informed by concerns for survival of democracy and the future of the country they have made ungovernable in the past three years and continue to impoverish through gluttonous consumption by their members.

It is just as well that except for the nosy reporters and election monitors, none of the above Ekiti ‘new breed’ politicians is complaining. They cannot begrudge followers for following the foot-steps of their leaders.