How Ekiti Governorship Election Was Won And Lost 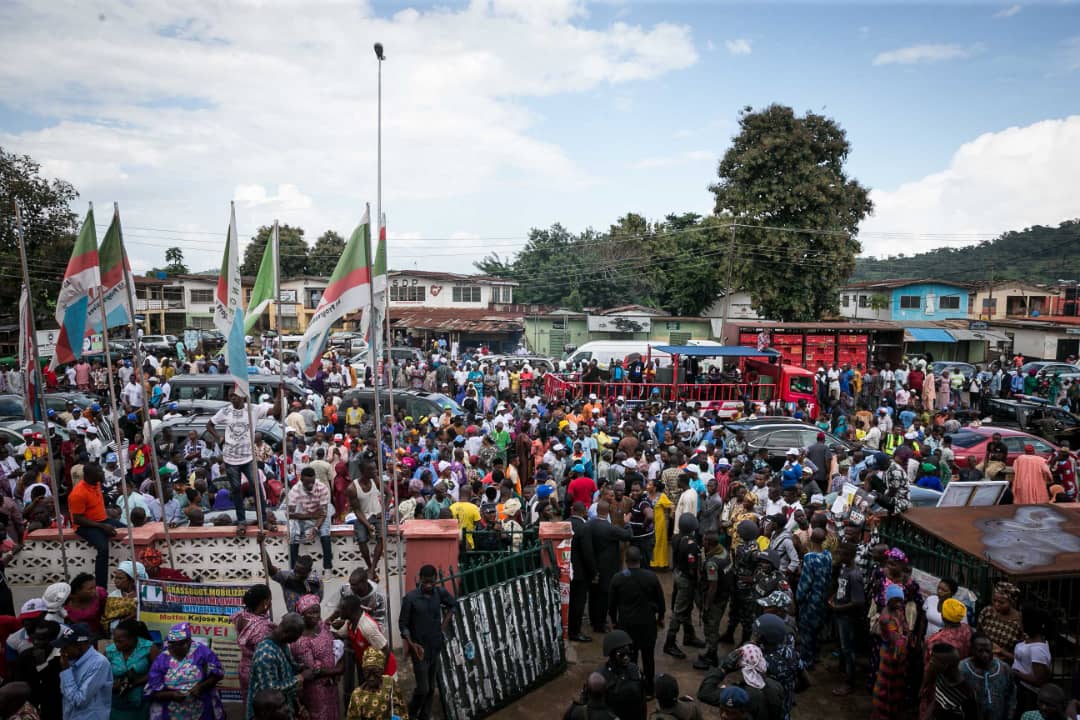 Saturday’s governorship election in Ekiti State was a very tight race between the Peoples Democratic Party (PDP) which fielded Prof. Kolapo Olusola-Eleka, the incumbent Deputy Governor of the state as its flagbearer and the main opposition All Progressives Congress (APC), which has as its candidate, Dr. Kayode Fayemi, a former governor of the state who until his resignation recently was the Minister of Mines and Steel Development. Except for supporters of both parties who were confident their candidates would emerge victorious, not even political analysts could predict who will triumph in the much- anticipated contest.

Eventually, at the end of the exercise which generated huge followership both at home and in the Diaspora, the Independent National Electoral Commission (INEC) through its Returning Officer, Prof. Idowu Olayinka who is the Vice- Chancellor of the University of Ibadan declared Fayemi the winner with total votes of 197, 459 against Olusola, who garnered 178, 121 votes.

The APC defeated PDP in Ilejemeje Local Government after it polled 4,153 and PDP scored 3,937 votes. Also, the state governor, Ayo Fayose was defeated in his Irepodun/Ifelodun Local Government, where APC scored 13, 869 and PDP polled 11,456.

In declaring Fayemi winner, Olayinka said, “That John Kayode Fayemi of the APC having satisfied the requirement of law has scored the highest lawful vote is hereby returned the winner.”

Many factors were responsible for the outcome of the governorship election in Ekiti State, including religion, the general conduct of the exercise by INEC, the role of money in the process and lastly, federal might.

What many people may not realise is the role religion played in the election which contributed in no small measures to PDP’s defeat. DAILY INDEPENDENT findings reveal that the Muslim community in Ekiti resolved on Friday 13, the eve of the election to withdraw their support for Fayose and his anointed candidate, Olusola owing to what they called ‘the deception by the governor aimed at shortchanging Muslims in the state’.

In choosing Olusola’s running mate, Fayose and the state chapter of the PDP had picked Deji Ogunsakin, a former Chairman of Ado Local Government. In announcing his choice, the state party’s Chairman, Gboyega Oguntuase, said the PDP decided to pick Deji Ogunsakin after extensive consultation with the Muslim community in the state.

He said, “It is also our belief that Ado Ekiti, being the state capital with the largest voting population, deserves consideration for deputy governorship position. It was also to give the Muslim community in the state a sense of belonging.”

However, the Muslim Rights Concern (MURIC) in a statement by its founder, Prof. Ishaq Akintola criticised Fayose over the choice of Ogunsakin, urging Muslims in the state to be cautious of the Greek gift.

The group wondered why Fayose who it described as a “Muslim hater” could now pick a Muslim as running mate for Olusola while he (Fayose) never had one in his cabinet as governor.

Few days to the election, however, many Muslims in Ekiti were shocked when The Redeemed Christian Church of God (RCCG) issued a statement expressing gratitude to Fayose for choosing one their active members (Ogunsakin) as the Deputy Governorship candidate of the PDP.

The letter of appreciation, dated July 2, 2018, was signed by Pastor Bayo Olugbemi on behalf of Victory Parish (My Father’s House) of RCCG in Magodo, Lagos State.

The RCCG noted that Ogunsakin, though said to be a Muslim by the PDP, was not only a very active member, but a committed worker in the church.

The letter reads in part: “Following the selection of our member, Mr. Deji Ogunsakin, as the PDP Deputy Governorship candidate for Ekiti State by your Excellency, the entire members and Pastorate of the RCCG, Victory Chapel (My Father’s House), Magodo Lagos appreciate the good gesture of the People’s Governor, Dr. Peter Ayodele Fayose.

“You will recall the church prayed earnestly after Your Excellency consulted our parish about your desire to choose our member and your candid request for the Parish to do background checks on brother Deji Ogunsakin.

“It’s also pertinent to correct the impression from some quarters in Ekiti that our brother, though born by Moslem parentage, is not a Moslem but a practicing Christian who gave his life to Christ and was duly baptized according to the doctrine of the Redeemed Christian Church and as laid down by our General Overseer, Pastor Enoch Adeboye”.

Following this revelation, which Fayose and the PDP could not refute, MURIC issued a statement warning Muslims against voting for PDP saying Fayose and his anointed candidate cannot be trusted to guarantee the future of Muslims in the state.

The statement reads “There is nothing wrong with being a Christian or a Muslim. There is also nothing wrong with voting for a Christian or Muslim candidate. But it is most shameful and outrageously dishonourable to deceive the public by hiding under the canopy of one religion to gain access to a public post knowing fully well that you are not what you claim to be. It is preposterous, disgusting and repulsive. Can we trust such people with the people’s mandate? Fayose has stolen the portion of Muslims in our common patrimony. It is an act of bad faith. It is dishonesty of the highest order”.

“This man has shortchanged Ekiti Muslims. The only ‘Muslim’ good enough for Fayose is the one who converted to Christianity a long time ago. Muslims in Ekiti should therefore ‘shine their eyes’.

Sources in Ekiti told our correspondent that during the Jumat prayer on Friday the eve of the election, Islamic leaders in the state passed a message to Muslims in the state to either boycott the exercise or vote against PDP.

Another major factor that determined the outcome of the election was vote buying which was done brazenly by the two major parties. On the eve of the July 14 election, Fayose’s PDP which hasn’t paid workers their salaries for seven months, began dispatching N4,000 to bank accounts of potential voters.

It was gathered that when the APC learnt of what was going on, it increased its own vote buying amount to N5,000 on polling day. It was also alleged that APC paid some voters as high as N10,000.

“Once you showed proof of voting for the APC candidate, you get your money” says an observer.

In the end, many believe the political party that outspent the other won.

Giving a general analysis on the election, a university don who spoke with our correspondent on condition of anonymity shortly before the announcement of the results said “This is much I can say. In the urban areas, PDP will win in places like Ado –Ekiti, Ikole, Ikere where you have larger number of votes”.

“As at now, we know the votes from these areas but they have not been officially collated. But in the hinterland where Fayemi used to have like 30 percent popularity, now it has been upped to about 50 percent but they don’t have the numbers. At about an hour ago, Fayemi was leading with about 1021 votes. About 40 minutes ago, it was increased to about 3,000. Now that 3,000 has been reduced to 500 because the votes of Ikole has come in”.

“If you are asking for historical pattern, I will say that rather than historical pattern, what we have will be the pattern according to money because somebody told us that the way Fayemi said it’s going to go is ‘ Oro ti owo ba se ti, ile lo ma gbe’ which literally means that there is nothing impossible for money to accomplish. Where APC has a stronghold, they are actually paying N10,000 per vote”.

“In other places, N5,000 where they believe they don’t have the strength. But where they have their own people like Oye and certain parts of Ado- Ekiti, which is the local government of the Deputy Governor, they offered N10,000 per vote. So, demography or vote swinging will not really work the way it is for now. The reality on ground is that money has played a huge role and the people at the fringes probably felt that like always, government didn’t quite touch them and so, there was some sympathy for Fayemi but beyond that, it’s all about money” he said.

What goes around comes around. There is no gainsaying that the election that produced Fayose in 2014 was skewed in favour of the PDP by the presidency. It was widely believed that the presidency under former President Goodluck Jonathan greatly assisted Fayose both in cash and security personnel in what is now known as the Ekitigate scandal. Now with the PDP out and APC now in the centre, Fayose and Ekiti PDP did not enjoy the special privilege they enjoyed in 2014.

Fayose who was the major beneficiary of federal might in 2014 however cried foul during Saturday’s election that security agents who worked in his favour four years ago are now arresting his men.

He said ““Majority of my staff have been arrested by the police. My chief of staff has been arrested. The security agencies have taken over the responsibility of INEC. The police authority has refused to pick their call, you cannot reach any one of them. This is sad” .

Speaking on this, human rights lawyer, Femi Okunlenu said “ I see law of Karma or retributive justice in action here. Surely, everything that goes around comes around. If anybody will even accuse APC of using federal might, it shouldn’t be Fayose. We are not poor students of history if he is. It is a lesson to everyone that power is transient and for everything we do, there is always a repercussion”.

This article was first published in The Independent