Ekiti poll: Kayode Fayemi and the rest of us 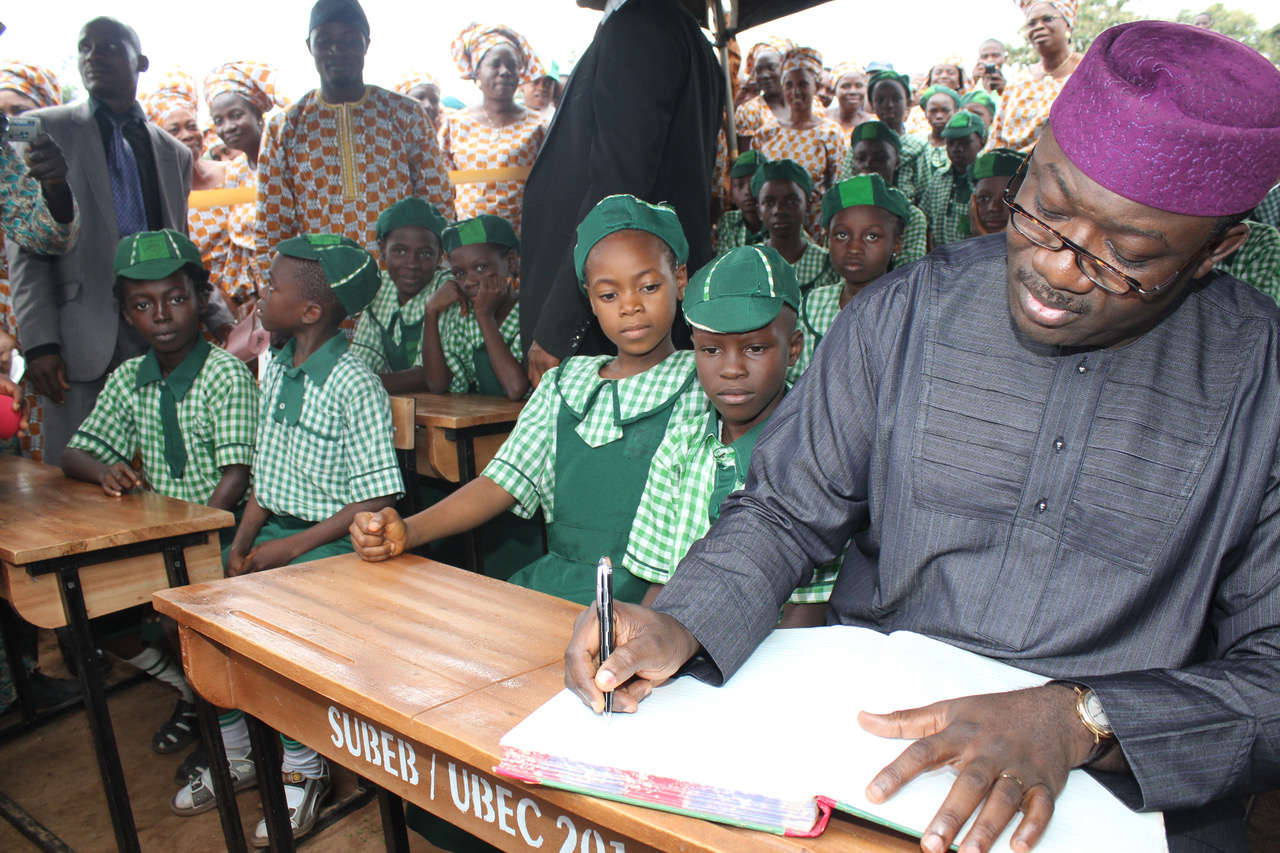 If we are not ashamed to think it, we should not be ashamed to publicly say it. That seems to be the decision of the antagonists of Dr. John Kayode Fayemi. This agenda was pursued with vigor like an unwritten agreement amongst this group of people. These are minority with very loud voice asking JKF not to contest either the primary election of the Ekiti State APC or the gubernatorial election of July 14th 2014. Some people within the APC were plotting, lying, scheming and applying all tactics to stop him. Members of PDP are also sparing no expense at strategizing or outright blackmail to stop him.

The House of Assembly has banned him from holding or contesting for public office. They are currently struggling to double their efforts to arrange the NLC, TUC, NUT, NGOs, KabeyisvKabeyis, Iyalojas, Babalojas, Farmers, Teachers, Artisans, Drivers, Housewives, Concubines, Students, Diaspora Associations, Indigenes and non-indigenes to ban or bar him from contesting as well. They are desperately looking for a way to stop him at all cost.

But wait a minute. Why are there so much hue and cry because of JKF? Why is JKF the center of their attention? Why are these people so eager and anxious to stop him? One of the greatest agonies of life is that we are constantly trying to stop that which is unstoppable. John Kayode Fayemi is indeed unstoppable because he is desirable.

We can easily forgive a child who is afraid of the dark; the real tragedy of life is when men are afraid of light. It’s understandable if the PDP is disturbed because of JKF but very worrisome is the fact that some elements within the APC are also not so comfortable or excited about his aspiration. Despite the unnecessary apprehension about JKF’s second coming, he remains the candidate to beat, if APC must take over Ekiti State. There were threats initially within the APC that JKF dared not signify interest in the race because he will be randomly defeated at the primary.

Like the proverbial cat with nine lives, JKF forged ahead and made known his intention to govern Ekiti state again, to complete the good work he started. Suddenly the tunes changed. Majority of camps within the APC spoke in one accord that if JKF contests the primary, he will win because the majority of delegates are loyal to him and his camp. As good as this assertion is, some still spoilt it by adding another ridiculous clause that he may not win the gubernatorial election.

They bring up strange lies and theories daily just to stop JKF. The only thing limiting your aspiration is your imagination. Ekiti State APC members need to look beyond personal interest. Now the eagle has landed. The waiting game is over as JKF has officially declared his intention to contest the governorship race in Ekiti state. He addressed the press on Saturday 31stn March 2018 and caused abrupt end to the rumors, speculations, lies and blackmails against his aspiration.

Naturally, unarmed truth and unconditional love will have final word in reality. This is why right, temporarily defeated, is stronger than evil triumphant. The fear of JKF is the beginning of wisdom for the PDP in Ekiti State. They brag that he will be defeated 16-0 again. They boasted that he will be an easy ride yet they blackmail and disparage him on daily basis, just to stop him. Why would anybody care so much and have sleepless nights because of an easy opponent? The PDP is aware of the fact that JKF is the only aspirant that can muscle the needed strength to neutralize its financial and security threats.

Now that the hatchet job the House of Assembly did seem to be of no effect, they resorted to telling lies against JKF to fool the unsuspecting public. Ekiti people are wiser now. However, for the few who are still under the misguided illusion that JKF is their enemy, you need to wake up. It will be disastrous for you to be fooled twice. You cannot keep birds from flying over your head, but you can keep them from building a nest in your hair. You can not stop the government in power but you can stop the continuity of the shenanigans. JKF is the best alternative.

For the APC to take over Ekiti State, all hands must be on deck. Otunba Niyi Adebayo recently came to the rescue making moves on how to foster unity within the Ekiti state APC and to ensure that the party stays united and stronger after the primary. This noble gesture has been given different names by mischief makers within and outside the APC. They accused Niyi Adebayo of working for or supporting JKF.

Some even said he is scheming to impose JKF. Wise men speak because they have something to say but fools speak because they just have to say something. Otunba Adebayo has been talking and consulting with APC leaders across the state because he believes in free and fair primary election. Above all, Otunba is more concerned about how to manage the post primary crises. It’s a common knowledge that the Ekiti State APC is eager and anxious to take over the state but the battle can only be won with a united front. APC members must resist the temptation to attack and work against each other. Let us not seek to satisfy our thirst for freedom by drinking from the cup of bitterness. United we stand, divided we fall.

What is JKF looking for again in Ekiti State? Some people ask this question severally because they only focus on the opulence not the service. Unless you have found something in life to live for that is more important to you than your own life, you will always be a slave. What would make a man leave certainty for uncertainty if not service? JKF isn’t perfect but he is far better than unknown angels. We all witnessed many of his life touching or changing programs in his first term. He will surely bring his lessons and experiences to bear if voted back to office again.

For the APC faithful in Ekiti state, before you work against JKF, always ask yourself these three questions: Why am l doing it? What will the result be? and Will I be fulfilled? Only when you think deeply and find satisfactory answers to these questions, go ahead. Instead of scheming, plotting, struggling and working hard to stop JKF, let us rally round and support him to lead us to victory. The tragedy is that what you disapprove of in others is the very thing you disapprove of in yourself. Each time you talk against JKF, you are indirectly putting the APC at a disadvantage. You share nothing from zero!

If you lose hope, somehow you lose the vitality that keeps you moving, you lose that courage to be, that quality that helps you go on in spite of it all. And so today, l still have hope that the Ekiti State APC members will rise above selfishness and put the party’s interest above all. If JKF was not good and is disliked by APC party members in Ekiti State, as some desperate individuals want us to believe, why must he be stopped from contesting the primary election against their aspirants? If the PDP considered JKF a lightweight politician that will be an easy ride, why is the government and PDP in Ekiti State desperately looking for a way to stop him from contesting against their candidate at the gubernatorial election?

Something definitely isn’t right in all these. Some people within the APC want JKF to be stopped because he is the only threat to their individualistic agenda. PDP members and government in Ekiti State also want JKF to be stopped because he is the only one they respect and fear amongst the crop of aspirants of the APC. All the APC aspirants are eminently qualified but you need more than good resume to confront, match and defeat a garrison commander and beat him at his game. This is where the experience (bitter and sweet), resources, synergy and connections of JKF are needed to win Ekiti State for the APC. They know all these and that is why he must be stopped. For the APC to win Ekiti State and for normalcy to return to the polity, all well-meaning Ekitikete should join the crusade, #Ekiti2018JKF and lets jointly change the negative vibes pervading our dear state. JKF is the best man for the job!