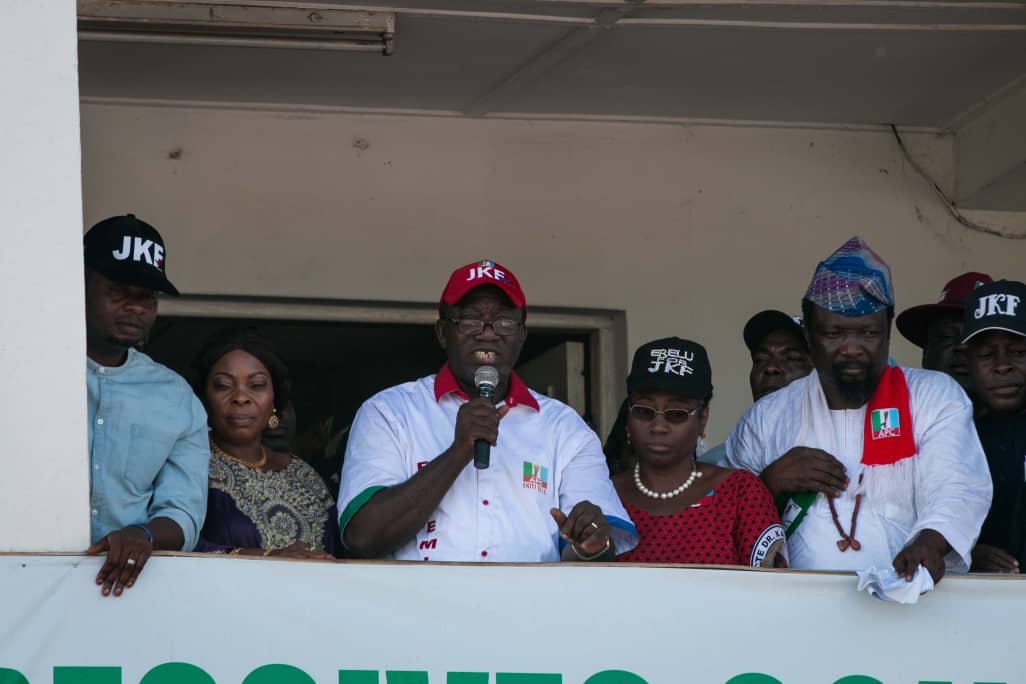 When he was manipulated out of power in a bizarre and reckless manner in 2014, it was not certain if Dr. John Kayode Fayemi envisaged that four light years later, he would bounce back in the emphatic manner he did in last Saturday’s Ekiti governorship election. There was no doubt that in that period of madness when impunity was reigning rough shod over all that was decent and desirable, there is every inkling that what beset the minds of Fayemi was the hopelessness and helplessness of the situation that permitted such atrocious brigandage to happen and sweep him out of power. The facts of what happened in Ekiti in 2014 were all too obvious for all Nigerians to take note and the widespread angst and condemnation the Ekiti charade drew stands as eternal damnation to the crudity of the erstwhile Jonathan government and the PDP. That President Buhari should allow for a free, fair and credible election that never required the idiosyncratic oddities that was launched in Ekiti four years ago, shows how much mileage we have made in four short years on our march to right democratic practice.

Four years ago, I guess what was going on in the minds of Kayode Fayemi were hopelessness and despair. Pray, who wouldn’t entertain such thoughts at a system that was brazenly arm-twisted and guided to pervert the democratic wills of the people of Ekiti and implant a governor that stood out for his rebuke to all what Ekiti State stands for? It was certain that what happened to Fayemi was enough to buckle the mind of a less-endowed person, his supporters and friends to give up. What happened in Ekiti four years ago was enough to make apolitical any straw mind. But with Kayode Fayemi, it was the other way round. Here is a sound intellectual, with enough residual strength to last unimaginable distance. Here is a persona imbued with tremendous inner strength to shake off any disappointment and trudge on where others would have easily given up. I had long seen him as a long distance runner that has all the potentials to go the entire long, winding bend and burst out victorious. That was what happened in the days in the trenches; the military days where he was a lodestar in the fight against military rule.

Again, if we recall how Fayemi became a governor, we would know that it was a long and winding battle where he went through the entire legal system several rounds before justice was given him in October 2010. If we try to inquest how he came back as Governor of Ekiti last weekend, we would have in our hands a determined and dogged fighter, an intellectual power house whose resolve and will never give in to such crude bayonets and force that were marshalled by the Jonathan government and PDP to remove him in 2014. There is little doubt that in engaging in these excruciating battles, Fayemi is guided and indeed honed by the stoic Catholic upbringing he was privileged to have had. As an altar boy, it was certain that Fayemi ingrained the tenets of patience, perseverance, virtues and strong morals from both his parents and the priests on whose feet he received his earliest trainings. He holds tenaciously to his Catholicity and is wont to value this as a guiding torch in sitting out the many life battles he had fought.

When he was impudently rigged out of power in 2014, Fayemi did not allow himself to be detained by such setback. Even with the obvious infractions that were deployed to get him out of power, he made no fuss. He accepted the outcome of that mangled poll, peacefully handed to the eventual beneficiary of that charade and projected for the future. He didn’t allow that unfortunate event to seize him as he leveraged his rich intellectual prowess to the eventual task to sever the source of the impunity and cancer that birthed the kind of malady that removed him from power. His deep role in the battle led to his being given one of the critical posts in the ensuing APC administration. When the call for a gubernatorial election in Ekiti came up again, he threw his hat into a crowded ring of galaxy of stars to succeed the embarrassing Fayose regime that was notorious for debasing governance and ridiculing Ekiti State for the four tempestuous years he had been in power. His emergence from that crowded field was seen as many as the real victory in his comeback quest.

Campaigning under the mantra; ‘Reclaiming Our Land, Restoring Our Values’, Fayemi captured the immediate yearning of Ekiti people who were sweating under the hood of Fayose’s maniacal theatrics and wiles. His campaign slogan sparked of the desperate search for a redemptive impetus to free Ekii from an embarrassing and humiliating atrophy which the Fayose governance represents. He tapped into the dominant progressive political hue to pry the hearts and minds of Ekiti voters who were distraught that their state has turned to a theater of absurd parody and butt of demeaning jokes since Fayose came to power. He poached the proud Ekiti man’s desire to undo the trajectory of 2014 that had reduced and indeed blackened his image since 2014. Despite the subterranean moves made to stop him, Fayemi soldiered on and stood strong till the people cast their votes and emphatically returned him to continue from where he was stopped in 2014. The rest, they say, is now history and for the next four years, Ekiti will witness the comeback of serene, deliberate, planned and strategic governance which they asked and voted for.

But then, what stands out in Fayemi’s victory last week is the power of resilience and determination which he packs in abundant quantity. Four years ago, his traducers made merry and kicked him about. Today, they cut a pitiable picture of vassalled goons at his mighty feet. Four years ago, those that borrowed devilish templates to invade Ekiti with all manners of devilry, sow dread and evil to remove him and take over power are wailing sissies today who are contending with the footnotes of a history they are warming its notorious pages. Those that partied and threw confetti to celebrate their unjust conquest have vanished into insignificant imprimaturs of a forgettable history while he straddles Ekiti today like an unconquerable colossus. Those that mocked and derided him four years ago as he gave in to brute and insensate force have been swept down the debris of history while he is the newly-minted man of the moment. Those that toasted unbridled and reckless power four years ago are now contending with insignificant anonymity that threatens to bury them on the quicksand of impunity.

The above scenario reifies the power of truth, the power of principle, the power of steadfastness and the power of integrity. They are embedded deep in the values, the restoration of which fired the desire of Ekiti people to bring Fayemi back. Fayemi is a man of value and this is why he had lasted this long in the Nigerian scene and will still last longer. He is a patient and durable politician that sees far beyond the present. He might not have envisaged that he would come back to power four years after he was manipulated out but in his life, beliefs and principles lies the catalyst for such quick rebound.

Just before he joined the race for the governorship, I had asked him if he was interested in a comeback bid. He had laughed and answered, ‘when we get to the bridge, we will cross it’. Few months later, he had gotten to the bridge and crossed it in such emphatic manner. That is the deep, confident, self-assured long distance runner for you. He is at the rightful cusp of history and there is no doubt that he will not disappoint the confidence imposed on him by Ekiti people. Today, Fayemi is laughing while those that laughed at him four years ago are weeping. What an irony! What a life! He laughs last to enjoy the richest bragging rights embedded in the aphorism that he who laughs last laughs best.

Congratulations Your Excellency and wishing you an eventful reign as Ekiti governor.

This article was first published on http://pointblanknews.com